I recommend Bruce Schneier’s new book Data and Goliath: The Hidden Battles to Collect Your Data and Control Your World to everyone. 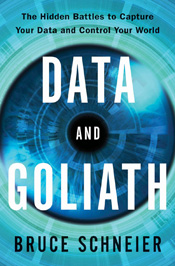 Schneier, as you probably know, is a security expert. A real one, a good one, and a thoughtful one. He wrote the book on implementing cryptography in software, he design the playing card encryption method used in Neal Stephenson’s Cryptonomicon, he was helped reporters understand the Snowden documents.

This is his post-Snowden book, on everything that’s known about how we’re being monitored every second of our lives, by whom, why this is a very serious problem, and what we can do about it. His three section headings set it out clearly: The World We’re Creating, What’s at Stake, and What to Do About It. In each section he explains things clearly and understandably without requiring any major technical knowledge. Often there isn’t time to get into technical details, anyway: we are monitored so minutely online, and what the NSA and other spy agencies do is so staggeringly intrusive, that the briefest description of one technique or system is all that’s needed to get the point across before moving on to another.

Data and Goliath is the book I’ve been waiting for, the one that lays it all out and brings all of the recent discoveries and revelations together. It has much that is new, such as discussions of why privacy is necessary so that people have the freedom to break some laws that ultimately lead to societal change (homosexuality is one of his examples), and good arguments against the “but I have nothing to hide, I don’t care” idiocy of people who ignorantly give up all their privacy. (Glenn Greenwald’s No Place to Hide: Edward Snowden, the NSA and the U.S. Surveillance State has more good arguments, such as: you may not care, but millions of people around the world trying to make things better do, and they’re in danger of being arrested and beaten just for speaking their mind).

He ends with what we can do, from the small scale (paying cash, browser privacy extensions, leaving cell phones at home) to the large (major political action). Here’s the final paragraph of the penultimate chapter:

There is strength in numbers, and if the public outcry grows, governments and corporations will be forced to respond. We are trying to prevent an authoritarian government like the one portrayed in Orwell’s Nineteen Eighty-Four, and a corporate-ruled state like the ones portrayed in countless dystopian cyberpunk science fiction novels. We are nowhere near either of those endpoints, but the train is moving in both those directions, and we need to apply the brakes.

Schneier’s page about the book has lots of links to excerpts and reviews. Have a look, then get the book. You should read it.

Here in Canada, just this week we learn that the Communications Security Establishment continues to spy on people worldwide and see the Conservatives push Bill C-51. Schneier’s book helps here as everywhere else: what is happening, why it matters, and what to do.