← Manuscript found in a Pinter play My .emacs.d →

I've updated Laertes, the special purpose point of interest provider I wrote for the augmented reality application Layar. It brings together geolocated tweets using one or more defined hash tags with points of interest from Google Maps to give an AR view of goings on and happenings for everyone at an event or conference.

I tried Laertes in February in Chicago and wrote it up in Code4Lib 2013 in Layar with Laertes. I noticed two problems: first that the map points could overwhelm the tweets, and second that old tweets can be uninteresting. If I'm out and want to know who's around now, I want to see only recent tweets: I don't care who was in this part of town two days ago.

This update fixes both those problems by adding in two filters: the first a checkbox so you can display tweets and/or map points, and the second a radio button so you can filter tweets to show only those from the last hour, four hours, twenty-four hours, the current day, or all.

Here's what it looks like showing one map point for the Scott Library: 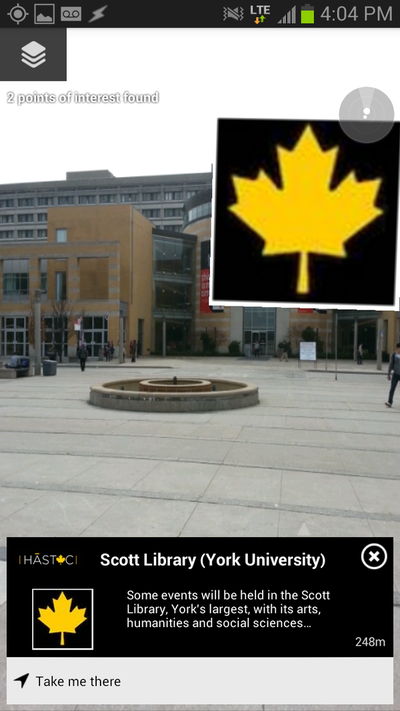 I hope there are a lot of people tweeting with geolocation turned on. I'm curious to see how it works out.

Complete installation instructions are on GitHub (with images!) if you want to try it yourself, but I'm happy to try hosting the POI end if someone wants to configure a Layar layer to talk to it. I'm running this at Heroku at the basic free level of hosting.

← Manuscript found in a Pinter play My .emacs.d →