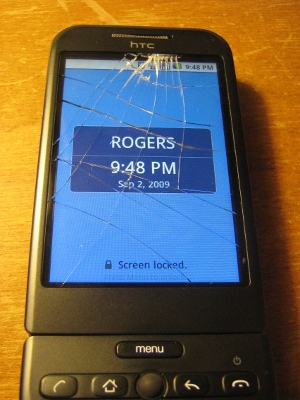 Last month I bought an HTC Magic smartphone with Rogers, a large Canadian telecommunications company, as my provider. I bought it because I wanted a smartphone, I didn't want a Blackberry or an iPhone, and this runs Android, Google's operating system for phones. I'd never had a mobile phone before but decided to get this so I could have Internet access everywhere I go, and also so I'd have a GPS dingus with me.

As you can see, I cracked the screen. I had it in a jacket pocket that ended up in the wrong place when I sat on a rock. Remarkably, the phone still works perfectly well, touch screen and all. The cracks are on the underside of the screen, and you can barely feel them on the top. I hope it'll last a long time like this, because it would cost $600 to buy a new one.

Apps I use regularly: The Weather Channel, Useful Switchers, ConnectBot, My Tracks, Sky Map, No Signal Alert. And the built-in web browser, of course. Also I downloaded some Star Wars sounds and made them the ringtones for all the events.

Apps I downloaded but don't use a lot but they look good: Better Terminal Emulator, Flashlight, Layar, Movies (from Flickster), Night Clock.

The battery performance seemed to improve after I completely drained it two or three times. I may have just been imagining that, and maybe it's because I use the GPS dingus less than when I first bought the phone. I have to charge the phone every night but I don't have any trouble getting through the day with regular usage. I keep a spare USB cable at work in case I need to, though.